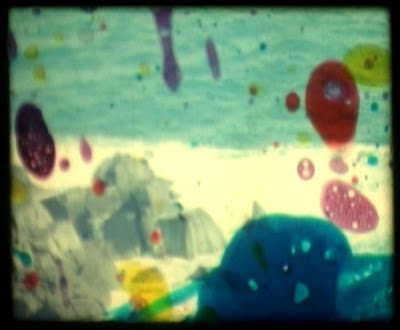 Come along and help to create the longest hand painted film in Britain!

Winner of the Deutsche Bank Award for Art at the Royal College of Art 2010, Unravel is an epic project that will create a hand painted film that correlates in length with the 874 miles between John O'Groats and Land's End - taking each metre between these two edges of mainland Britain as a ratio to equal one frame of 16mm film.

In collaboration with over twenty national and international film festivals across England, Scotland and Wales Unravel are holding touring workshops aiming to amass an epic sixteen hour film that will be created and manipulated by hand, by a diverse demographic of the people of Britain.

Free of charge and open to all, the Unravel team are looking to involve as many local communities as possible - from young children and families to experienced film veterans!

Unravel aims to turn the viewer into the maker of the work in a literal 'hands-on' way.

We hope that these events will be as entertaining, informative and inspiring introduction to film making, providing an informal setting for people to interact with each other as much as the project.

Formed by Maria Anastassiou and Chris Paul Daniels whilst studying at the Royal College of Art, Unravel is also comprised of OKO Lab of Leeds (Mark Pickles and Jo Byrne) and, Manchester based, Kelvin Brown.

Posted by The Museum of Club Culture at 00:11