Goths and Steampunks in Whitby

An exhibition of photography by Colin Young
Hull photographer Colin Young has spent 20 years photographing people, festivals and concerts. For the past five years he has documented the Goths and Steampunks that congregate in Whitby twice a year. These people travel from all over the country for a bi-yearly festival held in Whitby in April and October. The writer Bram Stoker found some of his inspiration for writing Dracula after staying there in 1890. The Goth sub-culture originally began in England in the early 80s – an offshoot of the post punk genre but has continued to survive up until this day. Steampunk fashion blends modern styles with technological artefacts and Victorian era influenced garments and accessories.
Colin's fascination with photographing Goths and Steampunks and their creative and unique outfits has resulted in an extensive portfolio of work and The Museum of Club Culture will be exhibiting a selection of his prints from Saturday 1st September for one month.
Colin is a self taught photographer using film and developing and printing them in his own darkroom, he is also the vice president of Hull based camera club YPI.
Preview Saturday 1st September 1pm – 4pm.
Exhibition runs until Sunday 30th September. The Museum of Club Culture is open weekends 11 am – 5pm and during the week by appointment. 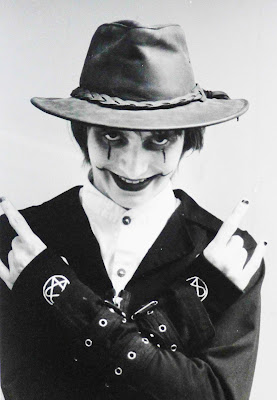 Posted by The Museum of Club Culture at 03:39